The plot thickens as Steven Galloway’s war drags on.

The award-winning Kamloops author never imagined that his career would become mired in a warzone similar to the one portrayed in his award-winning novel.

Things looked rosy for Galloway until he came under fire in 2016. His life now in ruins, he earns a bare living doing physical labour.

Galloway attended the University College of the Cariboo in the 1990s before it became Thompson Rivers University.

He is best known for his 2008 novel The Cellist of Sarajevo which sold 700,000 copies, was translated into twenty languages, and had film options. His prospects soared and he became chair of the creative writing program at the University of British Columbia in 2015.

In Galloway’s novel, set in the 1990s Siege of Sarajevo, a cellist watches as a shell falls and kills people waiting in a bread line. To commemorate the dead, the cellist is determined to play an Adagio in the crater created by the blast while avoiding sniper fire.

Galloway was terminated in 2016 over breach of trust and misconduct. A former student of his known as A.B. claims that Galloway had abusive sexual relations with her from 2011 to 2013. He says the relations were consensual.

In 2018, an arbitrator ruled that UBC had harmed Galloway’s reputation and the author was awarded $167,000.

Now Galloway sees some light from the pit dug by the explosive allegations. The B.C. Supreme Court recently ruled that his court case can proceed.

The plot of Galloway’s rise and fall has twists and turns worthy of a novel.

At first, Galloway had reason for hope that A.B.’s charges would prove unsubstantiated. In 2015, UBC hired retired B.C. judge Mary Ellen Boyd to investigate the matter. She found that it was not likely that Galloway committed sexual assault or assault (Globe and Mail Dec. 3 2021)

More support came for Galloway in form of a letter from some of Canada’s most celebrated writers, including Margaret Atwood. In 2016, she wrote:

The letter sparked an online backlash from former students who said the letter was an attempt to silence and intimidate them.

Andrea Bennett, a former student who said she witnessed her friend being slapped by Galloway but did not file a complaint, said she was disappointed by the letter (Maclean’s Nov. 16, 2016).

That prompted some of the writers to withdraw their names from the letter. Yann Martel author of the Life of Pi author, said:

“I did NOT sign the letter to defend an empowered white male. I did NOT sign it to silence young women, or anyone else (Maclean’s Nov. 16, 2016).”

Galloway shot back with a defamation suit against A.B. and 20 of her supporters.

A.B. and others fired back with a request to throw out the defamation suit in order to protect their freedom of expression. Under B.C. law, a legal action can be shut down if a court deems it to be a strategic attempt to silence and intimidate others, called anti-SLAPP law.

“It is difficult to see how something so extreme and potentially reckless [as A.B.’s] would be in the public interest (Globe and Mail Dec. 3 2021).”

Award-winning Kamloops author Steven Galloway has problems of his own making. They could have been avoided. 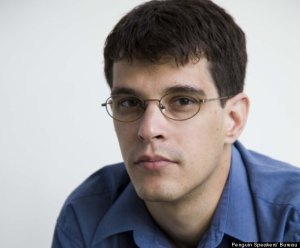 Galloway was raised in Kamloops and attended the University College of the Cariboo in the 1990s before it became Thompson Rivers University; where I taught for twenty years.

Galloway is best known for his 2008 novel The Cellist of Sarajevo which sold 700,000 copies, was translated into twenty languages, and had film options. His career took off and he became chair of the creative writing program at the University of British Columbia on July 1, 2015.

A year ago, Professor Galloway was dismissed from the writing program and has since been fired by UBC, which cited “a record of misconduct that resulted in an irreparable breach of the trust placed in faculty members.”

His firing set off a storm in Canadian literary circles. University of Victoria faculty of the Writing department signed a letter critical of the firing process, a letter also signed by literary heavyweights such as Margaret Atwood. UBC’s faculty association said it has serious concerns with the administration’s “misleading public and private comments regarding Professor Galloway.”

Former students don’t see it that way. They say he fostered a sexualized atmosphere, drank regularly with students and played favourites –bringing some students into his inner circle while casting others out.

Reporter Kerry Gold investigated some of those misadventures in her feature-length article in The Walrus (December, 2016). Galloway would convene Thursday-night sessions in a local canteen known as the Legion with up to ten students. “The group would stay late, consuming alcohol at a pace that made some uncomfortable,” says Gold.

Galloway’s former teaching assistant, Erin Flegg, says the sessions became an informal part of the curriculum. Participants would vie for Galloway’s approval and the rewards it could bring: references, teaching positions, introductions to agents and publishers.

One night in 2012 was particularly rowdy when they met after graduation. It wasn’t late but Galloway had quite a lot to drink, a witness told Gold. “It’s time,” Galloway said, as he got up and slapped the face of a female student next to him. It was revenge for what she had said in class –that she didn’t like Galloway’s writing. Galloway then responded that he would like to slap her face but that he would wait until she was no longer a student.

Partying with students is a bad idea. As a high school teacher and later an instructor at TRU, my policy was never to date or revel with students. The obvious problem is the power differential. Teachers have the power to promote students and advance their careers.

Another student hoped to get into Galloway’s writing class and was drawn into to the struggle for his attention. “He invited her to come drinking,” says Flegg, “That’s how the relationship began. The power dynamics were there from the start.” The two had a relationship for three years.

Intimate relationships are a temptation for teachers. For me, I only had to remind myself that I had been placed in a position of trust: the betrayal of which would diminish me and my profession, and would harm my students.