Some Kamloopsians worry that the 50 pipeline workers from out of town will bring the Cov2 virus into our community. That number of workers will swell to 600 by August. 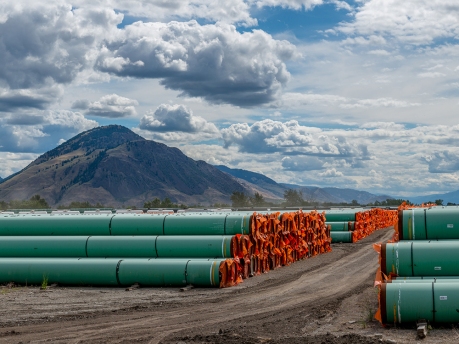 The Site C dam site serves as an example. After concerns were raised in March, several workers went into self-isolation. Even though none of the workers had been tested positive at the time, people in the closest town of Fort St. John worried that the hospital would be inundated. Town councillor Trevor Bolin said the site should be shut down and added:

“If there was an outbreak at Site C, our hospital would be inundated with patients that we could not handle, that our health system couldn’t handle, with the seven ventilators that we have in the community.”

Months later, one case of COVID-19 has been recently indentified at Site C. That person has been isolated before having contact with other workers. Just one case. Fort St. John’s hospital has not been inundated.

No COVID-19 cases have been indentified in Kamloops pipeline workers, despite ongoing work in preparation of the new pipeline near Ord road. This month, crews will start to pull the new pipeline under the Thompson River.

Last weekend saw a dramatic rise in COVID-19 cases in the interior of B.C. So why hasn’t the presence of 50 pipeline workers not resulted in an outbreak in Kamloops?

The answer is precautions. It is not in Trans Mountain’s best interests to have a skilled, expensive workforce out of commission.

After the COVID-19 pandemic hit, Trans Mountain delayed construction in Kamloops for two months to ensure its pandemic safety measures were in place, including temperature checks (Kamloops This Week, June 2, 2020).

In addition, Trans Mountain will implement precautions such as one person per hotel room, spacing for dining, extra cleaning requirements and maintaining spacing during transport to worksites.

The economic benefits to Kamloops are substantial. Seventeen hotels and motels in Kamloops will accommodate Trans Mountain’s workforce. Construction spending in the Kamloops area is expected to be more than $450 million over the next two years. The workforce will spend an estimated $40 million for goods and services at local businesses.

There is no room for complacency when dealing with Cov2. Contagion is an obvious risk with this virus. Kelowna’s experience is a cautionary tale. On the Canada Day weekend an advisory for downtown Kelowna was posted after eight people had tested positive following two house parties involving visitors from other parts of B.C. That number quickly grew to 13 on July 13, then to 35, and now to 60 plus.

According to reports, those parties were not wild free-for-alls like some Texas bar scene.  The parties were mostly done with the right intent with the numbers were kept small. The mistake they made was not the high numbers at any one time but that there were different people every night.

The fact that there are no COVID-19 cases in pipeline workers in Kamloops is no accident. With careful precautions, Kamloops can economically benefit without a COVID-19 outbreak from the workers.

What will cause an outbreak is the assembly of large numbers of people who blissfully don’t practice good pandemic hygiene.

Big-tent parties are standard in politics but in government, they rule from a small room. 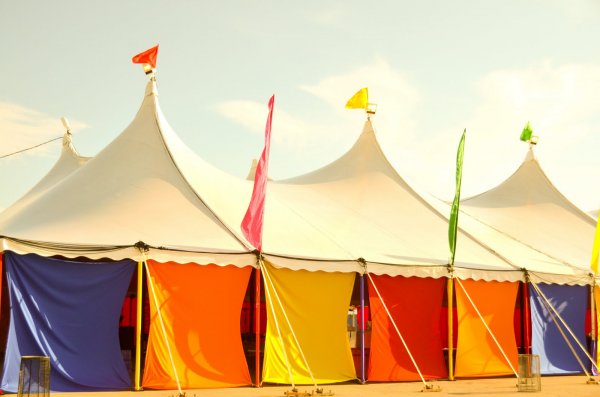 Getting as many voters into your tent ensures a win in the first-past-the-post system. Once elected, a relatively small group will determine the direction of government. A smart leader will pick cabinet members with diverse opinions. An arrogant leader will dictate the agenda.

Site C dam was one of those ideas that should have been halted early once it became obvious it wasn’t needed. Former Premier Christy Clark blindly proceeded with it.

For all who could see, it was doomed.  Even to me, it was obvious. Three years ago, I wrote:

“An independent review of the project found that BC Hydro could supply the province with electricity, without the new dam, with modest growth in LNG production, until 2028.”

Clark forged ahead with Site C dam in the face of calamity, even as markets for LNG collapsed.

Premier Horgan was left with a no-win situation. If he cancelled Site C, he would make the thousands of unionized workers unhappy. If he approved it, it would make environmentalists unhappy. Horgan chose the pragmatic solution. David Eby, B.C.’s Attorney General, explains.

“The strategies of the previous government to avoid oversight and push the project ‘past the point of no return’ with the hope, achieved, of visiting financial ruin on the books of any government that would seek to cancel it, are unforgivable.”

The cost of competing dam, Eby says, was the same as cancelling it; except in the first case you end up with an asset, essentially a mortgage paid over 70 years. Cancelling it would result in a debt, leaving the government with less money to spend on health, schools.

Horgan’s decision was sure to disappoint. You would think his fragile government would be doomed. However, Green leader Andrew Weaver is not keen to take down the government any time soon for two reasons. No one wants another election.

Multi-tent governments can hold opposing views. While the overarching progressive banner would fly over government, different flags can fly over each tent. Pragmatists can huddle in one tent and environmentalists in another, grumbling at the other but placated in the comfort that they share the same basic values of fair wages, poverty reduction, human rights, and equality.

Multi-tent governments are a novelty in Canada. If a faction in one tent feels betrayed, they can vote to be part of the other tent in the next election –essentially an opposition built into government. With a divergence of ideas, the best plan is more likely to prevail.

Had a multi-tent government been in place when the BC Liberals were in power, Site C would probably not have proceeded. Instead, a premier with a big ego and tunnel-vision pushed the plan beyond the point of no return.

New pipelines get politicians elected. However, they will remain empty; much like election promises that remain unfulfilled. There are good environmental reasons not to build new pipelines but the economics are rarely discussed. 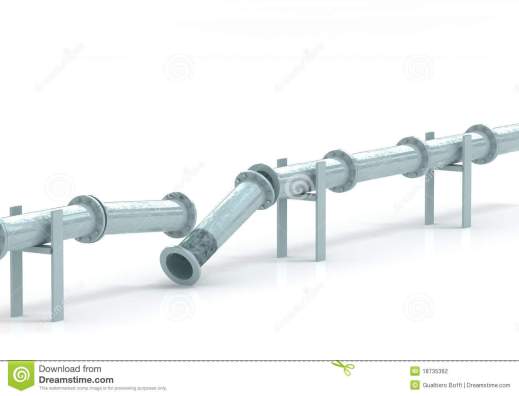 First the politics. Workers in the resource extraction industry like new pipelines because they symbolize well-paying jobs. NDP leader Adrian Dix learned that bitter lesson in 2013 when he opposed the proposed Kinder Morgan pipeline and regular unionized workers flocked to the BC Liberals.

Prime Minister Trudeau understands the politics of pipelines when he approved three pipelines and placed one under review (Trans Mountain, Enbridge Line 3 and Keystone XL approved and Energy East under review.)

However, approval of pipelines does not guarantee that oil will actually flow. Thomas Gunton, Director of the Resource and Environmental Planning Program at Simon Fraser University, has done some number-crunching. His analysis suggests that we are going to end up with a lot of empty pipelines:

“Building all four projects would therefore result in 2.4 million to 2.7 million bpd [barrels per day] of excess capacity in 2025, equivalent to about four Trans Mountain expansion projects worth of empty pipeline space (Globe and Mail, January 12, 2017.”

To put these numbers in context, our current capacity for pipeline and rail is five million bpd. The Canadian Association of Petroleum Producers (CAPP) forecasts that the current capacity will fill needs up to 2025. Note that this prediction is not coming from some environmental group but the very industry that produces the stuff.

Even existing pipelines may remain empty. The National Energy Board (NEB) projects that the price of oil price will drop by $17 a barrel. New climate policies that could further reduce production further.

Empty pipelines are expensive. Guess who’s going to pay for them?

“The capital cost of empty pipeline space would be about $25-billion, which would be borne by the Canadian energy sector in terms of higher tolls and by the Canadian taxpayer in terms of lower tax payments to government due to lower corporate profits. If current rail capacity is included, the surplus capacity would be even higher.”

You, dear reader, will pay for empty pipelines in higher fuel costs. The pipeline builders will recover the cost through higher tolls that oil producers will have to pay in order to move their fuel to market.

Politicians like to build monuments. Premier Clark is doing just that in proceeding with Site C dam. Like empty pipelines, transmission lines from the dam on the Peace River will remain empty. The market for electricity is flat and with conservation, consumption could be reduced by twice the output of the proposed Site C dam, according to the B.C. Sustainable Energy Association . They add:

“In its 2013 Integrated Resource Plan, BC Hydro assessed Site C and other possible resource options in relation to forecast energy and capacity needs over the next twenty years. BC Hydro concluded that Site C is needed for its earliest practical in-service date of 2023.”

Like the Egyptian pyramids, new dams and pipelines will create jobs but serve no practical purpose. The difference is that tourists will not flock to see them.

Protests continue at the Site C dam location on the Peace River despite a court that allows building.  The Supreme Court of British Columbia ruled in September that attempts by the Prophet River and West Moberly First Nations to quash an environmental certificate issued by the government were invalid. 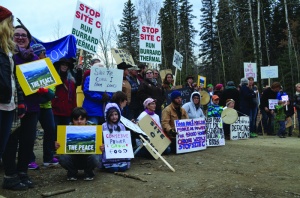 “I am satisfied that the petitioners [first nations] were provided a meaningful opportunity to participate in the environmental assessment process,” Justice Robert Sewell wrote.

That didn’t stop Arthur Hadland from blocking construction. The long-time politician and area farmer was charged with mischief after being arrested earlier this month. “I don’t want to be a hero,” Hadland told CBC News. “Someone has to speak for the river.” He’s a Peace River Regional District director and ran as an independent in the last provincial election. Pat Pimm, who won the riding for the B.C. Liberals, is in favour of the dam.

Helen Knott of the Prophet River First Nation is occupying an historic trading post site in protest of the construction. Knott and her group are committed to defending treaty rights, even if it means being arrested.

“It’s not necessarily anybody goes into it with that idea, like, yeah, we’re going to be arrested, right? It’s that, yeah, we’re committed to saving this tract of land and to, you know, actively use our treaty rights here,” she told CBC News.

Knott’s view epitomizes a clash of cultures in B.C. This province is unique in Canada in that only two historical treaties were signed with indigenous people. As a result the question of land ownership remained unsettled for much of B.C. until the Tsilhqot’in decision of the Supreme Court of Canada. It ruled that, yes, B.C. natives had aboriginal title to a 1,750 square kilometres region.

The implications of the Supreme Court ruling are unclear. Globe and Mail reporter Jeffrey Simpson says: “The court’s ruling was complicated, which might explain the variety of interpretations. It did say that the Tsilhqot’in First Nation had aboriginal title over a portion of the land it had claimed, but by no means all of it.”

In a press release last June, First Nations affirmed that in one of four principles: “1) Acknowledgement that all our relationships are based on recognition and implementation of the existence of indigenous peoples inherent title and rights, and pre-confederation, historic and modern treaties, throughout British Columbia.”

In their view, in light of the ruling, nothing has changed from before European settlers came here.

From a technical viewpoint, there’s disagreement about the need for this dam. I argued a year ago that, while dams are an excellent complement to solar and wind, Site C will produce power that we don’t need now; especially not now that the scaled-down LNG plants won’t need the electricity. While the technology is sound, the location at site C isn’t at this time.