One voting system doesn’t fit all of B.C.  That’s why I like the Rural-Urban system of proportional representation. It recognizes the vast geography of parts of our province and the diversity of people in others. Rural-Urban PR is one of the three systems offered in the mail-in ballot on October 22. 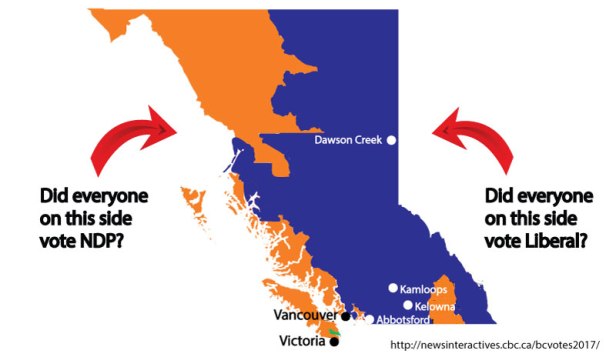 Rural-Urban PR was recommended by Canada’s former Chief Electoral Officer Jean-Pierre Kingsley. It was used in Alberta and Manitoba for 30 years where Winnipeg, Calgary and Edmonton used Single Transferable Vote to elect multi-member ridings from 4 to 10 MLAs and the rest of the provinces used First-Past-the-Post to elect rural MLAs.

Dense urban areas lend themselves to a Single Transferable Vote, a system proposed by the citizens’ assembly in 2004. STV combines small ridings into larger ones that would be geographically related such as in the Fraser Valley. Instead of electing one MLA from four ridings, four MLAs would be elected from one riding.

STV uses a ranking system similar to what’s now used in Kamloops’ municipal elections. Unlike Kamloops, where we have no political parties, candidates would be listed by party affiliation. A ballot would look something like the one below.

Four parties are running plus one independent.  Choose as many candidates as you wish in order of preference where 1 is your first choice, 2 is next and so on. If your first ballot doesn’t elect a candidate, your second choice could because it’s transferable.

Ballot counting occurs in rounds. First choice candidates are placed in piles and if ballots exceed a predetermined threshold, they are elected. The second choice of those elected MLAs is transferred so that someone else could be elected. The process continues until all the positions are filled. Finally, the losing candidate’s votes are transferred and a final count done.

Counting ballots in rural ridings is simpler. Unlike the First-Past-the-Post system used in Alberta and Manitoba, there is an extra regional vote.

In the second part of the ballot, you vote for vote for just one candidate. The successful candidates will be determined by the proportion of votes received. In this ballot there are 16 candidates running but not all will be elected.

The advantage of the urban portion of the system that candidates would represent the mosaic of voters and opinions found in metropolitan areas.

The advantage of the rural system is that one candidate still represents a geographic area while another represents a larger region.