This column marks twenty years of writing Eye View. Thanks to former editors of the Kamloops Daily News Susan Duncan and Mel Rothenburger for encouraging me to write, to CFJC Today for their support, and to James Peters for helping me to refine my writing and carefully read what I’ve written (I’m a lousy editor).

I’m seldom at a loss for subjects. What motivates me is my curiosity of the world and my desire to share what I found in a clear and concise manner. My ultimate goal is to write the perfect column. Maybe I’ll live long enough.

Who is responsible for the CO2 produced by streaming?

We are regularly reminded to reduce energy our consumption by replacing lightbulbs but when was the last time we were reminded to stream less?

The videos we watch consume 80 per cent of energy used by energy farms located around the world. Netflix alone pumps out over one billion hours of video a week. Now Disney and Apple have started streaming services. Streaming is just part of the picture says Jane Kearns, vice-president at MaRS Discovery District:

Even a simple search on Google adds up. A typical search requires as much energy as illuminating a 60-watt light bulb for 17 seconds.

While lightbulb replacement is promoted as an energy saver, no one reminds us to stream less. Perhaps it’s because server farms are so invisible: videos seems to descend from the clouds.

Yet, there are over eight million server farms around the world running full-tilt, all hours of the day. The fact that these processing machines are working 24/7 at maximum output barely registers on us. These invisible machines use 200 terawatt hours a year, about one-half of Canada’s annual electricity consumption. They emit roughly as much CO2 as the airline industry. And with global data traffic more than doubling every four years, they are growing fast.

It’s part of a bigger problem: when servers are located in a specific country but internet use is international, which country is responsible for the greenhouse gases they produce?

Northern countries are ideal for locating servers because the biggest cost is in cooling the computers. Companies like to build them where the weather is temperate – countries such as Iceland, Ireland, Finland, and Canada. Or where there’s lots of water for cooling. It doesn’t seem fair that those countries must add the CO2 produced by these servers to their total commitment.

British Columbia faces a similar situation with natural gas which it plans to export to Asia. Since natural gas will, theoretically, replace coal-fired generators, should B.C. be credited with the net reduction in CO2 or China?

It’s the same problem for China, where goods are made for sale globally by manufacturers burning fossil fuels in China.

The problem of energy consumed locally for global use needs to be addressed but when nations won’t own up to CO2 produced for local consumption, streaming will remain someone else’s problem.

The video-streaming giant Netflix recently told a panel reviewing Canada’s Broadcast Act that “market forces” should determine the programs that Canadians watch, not pooled resources like the Canadian Media Fund.

In making this claim, Netflix is essentially saying that they will determine how to spend our money –the fees they collect from Canadians- and not be dictated by what Canadians want to see.

Netflix claim that it’s not a broadcaster is suspect. It’s a disingenuous argument considering that millions of Canadians now watch shows and movies through video-streaming. Surely, that makes them a broadcaster.

OK, maybe Netflix is not a broadcaster in the traditional sense that their broadcasts are not over-the-air. That’s a technicality. But TV stations don’t stop being broadcasters because they transmit over cable. Our Broadcasting Act and Telecommunications Act, currently under review, should be updated to include video-streaming as broadcasting.

If your eyes glaze over at the talk of culture, digital media and regulations, it’s because there are so many distractions in the Netflix debate that it’s hard to keep track of them. Last year it was the so-called “Netflix tax” which has nothing to do with Netflix specifically. Rather, it’s a proposed tax on the entire internet. That’s obviously a bad idea because the internet has become essential in accessing education and government, not just video-streaming. The internet has insinuated itself into our lives that’s necessary for a functioning democracy.

Then there is the sales tax that Quebec and Saskatchewan have imposed on subscriptions to Netflix. While Netflix is not technically obliged to collect the tax and pass it on to provinces (they are not a Canadian corporation), they have agreed to do so.

Why is Netflix so agreeable in the matter of collecting sales tax and so disagreeable when it comes to contributing to the Canadian Media Fund?

It’s because they persist in claiming that what they sell is a product. But what they see as entertainment, the rest of the world sees as culture.

It’s a blind spot that all big American media giants have. They see the exportation of American culture as subject to the forces of the marketplace. They studiously ignore the fact that exported American culture is intended to swamp local, more poorly funded, productions.

Don’t get me wrong. Netflix produces some very good programs and is rivaling Hollywood in quality. It also produces some mundane and derivative schlop.

As much as Netflix wishes, programs don’t compete in a marketplace where the most popular ones win. The stories we tell ourselves capture our identity. While those markets are as small, they are as important as a tile in our cultural mosaic.

Canadians must stand on guard for a free and democratic internet. Look what happened in the U.S. when they let their guard down.

Earlier this year, a U.S. appeals court ruled that internet democracy was dead. That’s not the language that the court used: the technical term is “net neutrality.” Net neutrality means that everyone, even your humble scribe, has equal access to the internet; little bloggers, small businesses and big corporations alike. 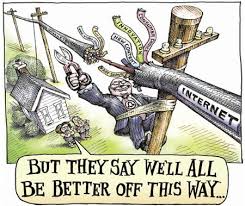 What keeps Internet Service Providers neutral is their status as an “open carrier.” This status benefits both ISPs and the general public alike because the content is separate from the service.

To illustrate, telephone companies are common carriers. Separation of content and service means the company can’t be sued for something a person says on the phone regardless of how defamatory or libellous it is. Nor can they give an advantage to advertisers with the promise that their annoying calls will getpreferential treatment.

Because of legal bungling, the FCC failed to argue that the internet is a common carrier. As such, ISPs in the U.S. can mess with content as much as they want, including censorship or preferential treatment. That will lead to a two-tiered internet, warns Professor van Shewick in which big players with lots of cash can get through where small start-up companies can’t.

Big players will use seduction to woo users rather than punishment. This is how it works. Big media will pay ISPs so that there data will be passed through to the user at no charge. As it now stands, subscribers have to pay for data, either in volume or by caps. For example, if a ISP carries a sponsored pay-for-view movie channel, users would not pay for that data whereas users would pay for competitors such as Netflix.

Given a choice of free data or paying for it, there is really not much of a choice. It would be very difficult for small start-ups to compete in a market where users would have to pay for their data, especially when start-ups have virtually no advertising revenue to begin with. When EBay and Google were just starting, it’s unlikely that they would have been able to raise venture capital under such conditions says van Shewick.

Some CRTC rulings in favour of ISPs have been warranted. I argued in an earlier column that data caps are a reasonable restriction on a limited resource such data. Data hogs should pay for their excess as should water hogs through water meters.

However, the CRTC must guard against any attempt to remove the status of open carrier from the internet. Failure to do so would not only limit freedom of expression and restrict charitable organizations, it would limit the growth of innovative technologies.