We used to think we were becoming more like our American cousins. In 2002 58 per cent of Canadians thought we were; now it’s only 27 per cent.

There’s more to the shift than the election of President Trump. We are maturing and are more confident. And it has to do with the realization that we are fundamentally different.

Those differences are revealed in response to a relatively simple statement: “The father of the family must be master in his own house.”

Because values are clustered together, response to that statement reveals other values says pollster Michael Adams: “Patriarchy is only one of more than 50 values we track, but it is clearly among the most meaningful. It is also a value that is highly correlated with other values such as religiosity, parochialism and xenophobia, and views on issues such as abortion, guns and the death penalty.”

American response to the statement cycles up and down. When asked in 1992, 42 per cent agreed. Support for patriarchy went up during the Bush presidencies and back down to 1992 levels during the Obama years. The election of President Trump has restored patriarchy to record highs.

Canadian response has been relatively constant for decades -in the low twenties.

It’s a versatile analysis. It also reveals the degree that immigrants adopt Canadian values. Thirty-five per cent of Canadian immigrants agreed with statement; not surprising when most immigrants come from male-dominated countries. In the U.S., substantially more immigrants agree with patriarchy at 56 per cent, even though they are from the same countries as in Canada.

I’m impressed with the way that Adams has of cutting through the clutter of public opinion. I wrote about his research in 2004 in my column for the Kamloops Daily News . Back then he was examining the connection between patriarchy and religiosity. “Canadians have more confidence in their ability to make moral decisions without deferring to religious authority,” said Adams.  As a percentage, twice as many Americans go to church weekly as Canadians, twice as many believe the Bible is literally true, and twice as many say religion is important to them.

In the same column, I argued that the continental divide is marked by something other than just the U.S./Canada border. Progressives on both sides of the border share the same “country.” I find that when I talk to people in the U.S. states of the Pacific Rim, they sound remarkably Canadian. Adams recent research confirms that progressive/populist divide in the U.S. Support for patriarchy is less strong in the coastal states than the Deep South.

This siege mentality that currently grips the U.S. under Trump indicates just how insecure some Americans feel. Before 9/11, fundamentalist saw modernity and pop culture as a threat to core values. After September 11, the threat became global with the loss of jobs overseas.

He came, he spoke, he left.  Just because U.S. president Bush finally ventured north to say soothing things to us, we shouldn’t think that he likes Canada any better than before. 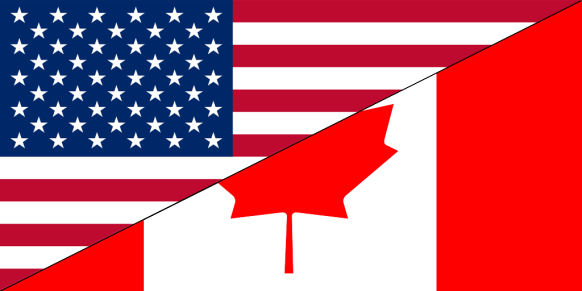 Oh sure, his speech was cleverly written by Canadian right-winger David Frum with inside jokes and quotes from prime ministers.

But Bush’s opinion of us hasn’t changed.  Despite the Canadian content, his speech was really directed to a wider international audience.  He’s trying to polishing his image on the world stage, where he hopes to charm allies into Iraq.  Gone was belligerent unilateralist.  Gone is the cowboy stance – – replaced with a thoughtful, warm, humorous, self-deprecating president who appeals to reason and good will.

Make no mistake about it, Bush still doesn’t like what Canada stands for.

It’s nothing personal.  It’s the same dislike that he has for Americans who voted for his presidential rival, John Kerry.   When Bush looks at a map of North America, we are all on the same side of the border.

On Bush’s map, Democrats and Canadians are all gripped in the same moral decay.  Canada and the northern states, as well as the U.S. west and east coasts, are all mired in a corrupt social morass.

President Bush is fighting to save the soul of America.   He is well positioned to be commander-in-chief of the only real war — the assailed values of the so-called “moral majority.”   He is a born-again Christian and reformed alcoholic.  He is conservative on social issues, favouring  capital punishment,  opposing gay marriage.  He thinks that decriminalization of marijuana is the road to ruin.

In other words, Bush is against the progressive values that Canadians (and many Americans) stand for.  Canada is a outward-looking, multicultural, modern society with strong support for social programs like health care.

The president perceptions are correct.  There really is a difference between Canada and the Bush’s America.

Bush sees the gap better than many Canadians do.  According to polls, some of us think the two countries are converging.  Canadian pollster Michael Adams has found that the continental divide is widening.  Canadian and the U.S. values are diverging, not converging.  The divergence can be summed up by two words — religiosity and patriarchy.

“Canadians have more confidence in their ability to make moral decisions without deferring to religious authority,” says Adams.  As a percentage,  twice as many Americans go to church weekly as Canadians, twice as many believe the Bible is literally true, and twice as many say religion is important to them.

In the area of patriarchy, Americans are twice likely to agree with the statement “the father of the family must be master in his own house.”  These are not superficial views.  All kinds of values follow the belief in that statement, including strident individualism and belief that the president is the patriarch of the nation.

Ideas represent mental postures that guide Canadians and Americans though everyday life.   Canadians believe in a pragmatic, multilateral approach to problem-solving.  “The moralistic narrative of absolute good and evil that wins many hearts and minds south of the border doesn’t work in Canada,” says Adams.

Bush’s America is threatened by Canada — not from terrorists who could cross to border to the U.S. but from modern ideas.  The psychoanalyst Robert Young has studied the psychology of the moral majority, many who are religious fundamentals.

Fundamentalists see their “traditional” way of life under attack by modern secular culture.  They fear annihilation of their values, and withdraw from mainstream society.

“When people feel under threat,” says Young, “they simplify; in a reduced state people cannot bear uncertainty.”  Fundamentalists see their struggle as cosmic war of good and evil.  They find comfort in sacred texts and spiritual leaders.

This siege mentality has been exacerbated since the attacks of September 11.   Before, it was only secular U.S. culture that was a threat to fundamentalists.  Now it’s coming from all over the world — Muslims, Arabs, liberals, thinkers, socialists, actors, and musicians.

What’s at stake for the moral majority is its very existence. “There is a war waging in America. The battle is over values, beliefs and the cultural basis of western civilization” says Louis Sheldon, founder of the Traditional Values Coalition.

The U.S. can defend it’s borders from terrorists, but it is defenceless against the psychological terror of their own making.