Higher minimum wages are good for the economy but you would never know it from Ontario’s experience. Their hike to $14 dollars per hour has taken an ugly turn. Seattle’s experience was quite different. 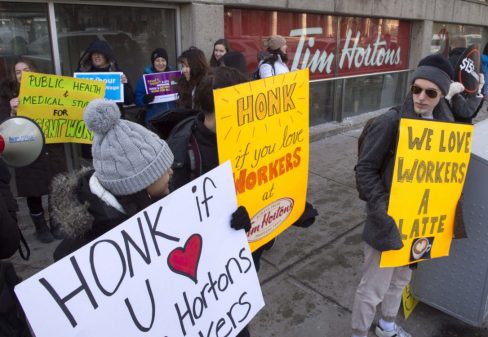 The upset in Ontario is centered on Tim Horton franchises. Cuts to benefits have triggered public outcry in support of employees. Demonstrations took place across Canada at Tim Horton shops last Friday organized by Leadnow.org.

The franchisees, themselves, have been abused by their owners: Brazil-based Restaurant Brands International Inc. RBI has been squeezing franchisees for more profits.

Franchisees in Canada have joined their American counterparts in suing the parent company. The Canadians formed the Great White North Franchisee Association and in their statement of claim, they complained:

“Since the time of the corporate takeover of Tim Hortons, the relationship between Tim Hortons and its franchisees has become more adversarial than amicable.”

It’s a toxic business plan that has left franchisees, employees, and customers with a bad taste in their mouth that a double-double won’t sweeten. The flap is damaging the iconic Tim Hortons brand.

Seattle’s experience was quite different. Employers took the wage increase to $15 dollars an hour as a challenge. Toronto-based Lending Loop surveyed of Seattle businesses. Their CEO Cato Pastoll explained: “It kind of forced people to make some just general good business decisions (Globe and Mail, October, 2017).”

One Seattle furniture store eliminated low-wage entry level positions and empowered employees to become more productive. One employee was so motivated that he contacted condo owners and offered deals on furniture for new tenants. The store owner was pleased with the boost in morale: “Find out what makes your staff excited and empower them to be part of it with you,”

“It’s really easy to become angry and start acting in injudicious ways,” said an owner of a nail salon in Port Angeles, Washington. He and his wife could have cut back on staff, or turned them into commissioned workers, but they streamlined operations instead. The time taken for each procedure was standardized which meant that more clients could be booked. An automated time-keeping system eliminated the time to manually fill out time sheets. Under different circumstances, staff might have resented seeing more clients a day but with an increase in wages, they were more willing to focus on work.

Contrary to the calamity predicted by some doubtful business owners, higher minimum wages don’t result in more unemployment. Studies done by the Organization for Economic Co-operation and Development show those countries with higher wages shift employment from formerly low wage sectors such restaurants to higher wage areas such as technology.

The owners of Tim Hortons could improve profits though the introduction of technology.  I notice that McDonalds has automated kiosks where you can both order and pay for your meal.

Higher minimum wages are a boon to the economy because businesses save costs by keeping experienced workers and reducing training costs; productivity and profit margins are improved; and local economies are enhanced with worker’s new spending power.

When Labour Minister Joan Smallwood was in Kamloops recently, she announced that the government of B.C. was planning to increase the minimum wage.  While the announcement was met with approval by those working in low paying jobs, their joy was not shared by some of Kamloops’ business leaders.

The past chairman of the B.C. Chamber of Commerce, Al McNair, said that raising the minimum wage will harm our economy.  The key to higher wages, he added, is a thriving business community.  He was referring to the principle of supply and demand as applied to labour.  When the economy improves, more people are employed, which in turn, creates a shortage of labour. A shortage of labour drives up the value of labour, and wages increase to attract workers from that diminished pool.  But is this a classic example of the supply and demand forces that drive a market economy?

McNair didn’t offer any examples of where increased economic activity has a greater effect on wages than increased minimum wages.  But there is a perfectly good example right next door.  We can use it as a test case.

Alberta has the lowest unemployment rate in the country and its minimum wage is lower than B.C.’s:  $5.90, compared to B.C.’s $7.15.  So, wages for low paid jobs should be greater in Alberta.  But they are not —  28 per cent of Albertans work in low paid jobs, compared to 19 per cent for B.C., according to a study done by Statistics Canada Labour Force Survey, 1997.  For purposes of the survey, low pay was defined as less than $9.24 (two-thirds of the Canadian median wage).

So, why doesn’t the supply and demand theory of wages work in this case?  Minimum wages set a standard for salaries –they are used as a starting point.  Two opposite forces are at work: a low starting wage keeps wages low and a shortage of workers tends to drive wages up.  In the case of Alberta, the minimum wage has a greater effect than the relative shortage of workers.  Forces affecting the cost of widgets does not affect wages.

In fact, the minimum wage has a greater effect on wages than worker shortage in all provinces, according to the same study.  So does union membership.  In both Alberta and B.C., only about 6 per cent of unionized workers were in low income jobs.

Belief that market forces will solve social problems, such as low pay, is naive.  While supply and demand is unquestionably fundamental to the function of  markets, it is not applicable to social problems, like child poverty, national health and public education.  Yet, profit driven business is often quoted as a solution to our problems.

Market forces are very good at concentrating wealth.  Canada’s rich are getting rich and the poor are getting poor. Only governments can redistribute wealth and help smooth out disparities in health and education.  And while the goal of government is not to make a profit, nor should it be, governments run social agencies more efficiently than business.  Government efficiencies are the result of the scale of operation, and from the fact that senior administrators are not collecting millions of dollars.

I would have thought that the business community would be pleased that B.C.’s working poor could now make a decent living. The work ethic is something worth cultivating.  Pride in work and the sense of self-sufficiency is something that everyone understands.

The working poor should be rewarded for their effort, rather than punished through low working wages.  A decent minimum wage is often the difference between making a living and seeking welfare.  If British Columbians are kept working, they are contributing members to the economy, not dependents on handouts from society.

Minimum wages have not kept up with inflation.  Whereas unions have been able to bargain higher wages, B.C.’s working poor have not.  The result has been that they have been driven to the brink of poverty and despair.  Since business will not deliver higher wages, the government must intervene.  Failure to do so will result in increased costs for social assistance to all British Colombians.