Solar and wind energy suffer from a storage problem. They produce in abundance, often too much, when the wind blows and the sun shines. Storage of that abundance is one solution but it’s expensive and inefficient. You don’t get as much out as what you put in; like a bank account that gives you negative interest. 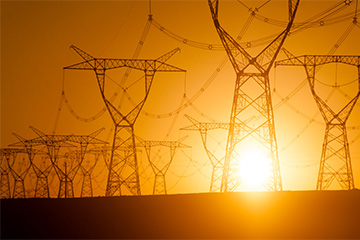 The sun takes a long time to cross the four and one-half time zones of our big country. The advantage of that is when the sun shines on Canada’s largest solar farms in Ontario at ten o’clock, surplus electricity could be used to make breakfast in B.C. and lunch in Newfoundland.

Great idea, except that we have no way to get the excess power across Canada.  B.C. is connected to western Alberta by a major (345 Kilovolt) line and stops. There is nothing between Alberta, Saskatchewan, Manitoba and Ontario. One connects Ontario, Quebec, and the Maritime Provinces; none connects Newfoundland.

While there are few east-to-west Canadian connections, there are 34 lines connecting Canada to the U.S. The problem with north-south connections is that the sun shines on all solar panels in the same time zone at once.

Those gaps in Canada’s transmission lines create a challenge for green energy sources -wind even more than solar. Whereas solar power is fairly predictable, wind can be a problem. Sudden storms can wreak havoc with a power grid, dumping huge amounts of power into the system with nowhere for it to go. Some power utilities, such as in Germany and Texas, pay customers to consume electricity just to rid of it.

Climate change is creating increased demand on air conditioners in some areas of North America, while creating storms and wind in other parts. One big grid would link the wind power to where it’s needed.

The fragmentation of power grids is a problem says science writer Peter Fairley of Victoria:

“This balkanization means each region must manage weather variability on its own (Scientific American, July, 2018).”

A big grid would soak up all the power you can pump into it but it requires weather reports. We need to know where the sun is shining and where the wind is blowing to determine where sources are. We already have that. The U.S. Department of Energy and National Renewable Energy Laboratory maps the potential energy areas of four kilometre squares, updated every five minutes throughout the year. Couple that weather information with a huge single grid and you can send surplus power to where it’s needed.

“What we need is a weather-smart grid design, directed by meteorology and built on long-distance transmission lines that can manage the weather’s inconsistencies. Such a system could ship gobs of renewable power across North America to link supply with demand, whatever the weather throws at it.”

Just think, the tidal power generated in the Bay of Fundy could heat a toaster in Moose Jaw faster than the rate at which photos of kittens are shared on Facebook.

This site uses Akismet to reduce spam. Learn how your comment data is processed.